Place for discussions about the RX-8
Post Reply
23833 posts

SeeJay wrote:By all means hold fire on them there strakes..

johnbb99 wrote:So is it considered a serious [potential] problem, that the oil coolers and radiators are unprotected, as standard?

There is a (small?) chance of a stone going through one - that would be serious. Eventually the fins on the coolers do become very bent from debris hitting them which, I understand, effects the cooling. The mesh grilles do also have the benefit of keeping out dead leaves and crud though.
'Grington.
former Club Treasurer 2010-18 (now finally retired)

OK, thanks for the responses; I'm convinced.

John -- giving some TLC to a 2006 Winning Blue 231. Mouse Mat Mod & LED sidelights. Fitted the Rotary Revs Coil kit. PZ suspension and Sohn kit fitted. Now have replaced the rusty sump with a new one, and the oil coolers and pipes with tidy used ones.
Top

. Then to the track . Car is on 68000 and had all coil packs before I bought it so fingers crossed it's all ok for a while lol

Thanks for the advice I will look into them asap . Do they just clip or stick in or is the and fabrication to fit

Finally fitted my exhaust shrouds to my pz thanks bigpete

Thanks Dave; I was reluctant to spend nearly 10% of the car's purchase price on grilles...

John -- giving some TLC to a 2006 Winning Blue 231. Mouse Mat Mod & LED sidelights. Fitted the Rotary Revs Coil kit. PZ suspension and Sohn kit fitted. Now have replaced the rusty sump with a new one, and the oil coolers and pipes with tidy used ones.
Top

Finished fitting the Lambo hinges.
Well not quite just today as this job actually started on the 18th with a visit to Jays (Frankies Speed Shop) with the intention of getting the whole job sorted there. As often happens with best laid plans time eventually beat us as we encountered some alignment and wiring stretching issues of which I won't bore you with the details we finally just wired the motor direct and put the window up and left it unplugged and I set off home.
Down the motorway slip road changed up into third and heard the most horrible scraping sound, lifted off, noise stopped, accelerated and at 65mph back it came so cruised to the services at 55mph. Muppet me had not screwed on the front edge of the wheel arch liner which is now somewhat shorter, only one thing to do with no tools to hand so and so I brutally just ripped it off!
Anybody got a N/S arch liner they don't want?

Fast forward to this weekend and off came the bumper, headlights and wings. Out came the existing wiring bulkhead plugs, 19 snips on each one and they went in the scrap bin to be replaced by ones from BigPete that effectively lengthened the wiring.
When installed originally the protecting boot points downward but with the lift of the Lambo doors they need to point upward. Simple solution is to rotate the boot 180' and then bend the wiring through 180' to lead down to the cables coming out the door.
38 heat shrink wrapped soldered joints later the job was done!

Drivers side ready to have the longer wiring attached
image.jpeg (115.15 KiB) Viewed 834 times

The open protective sleeve was the sealed with clear silicone. The gas shock was also reversed so that the shaft points downward which apparently is how gas shocks are supposed to be installed.

I finally wired my bluetooth interface directly to the 12V/5V inverter so that I leave my cigarette lighter socket free for 2 phone chargers.

Also fixed the led lights on the lit gear knob, much to my wife's delight. I'm not fussed about it, but she seems to find that more important than new brakes on the car :-)
Top

johnbb99 wrote:Thanks Dave; I was reluctant to spend nearly 10% of the car's purchase price on grilles...

Those were my thoughts John, so I bought some mesh from the bay and did my own. Basically the same way Dave did.
Followed the DIY here: http://www.rx8ownersclub.co.uk/forum/vi ... 30&t=50811

I have fitted the badge now and fitted it to the car will post a picture later.
Shane.. 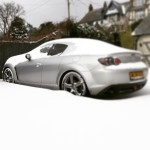 Covered the front surfaces in dead/dying insects on the way home from the Welsh countryside. Here's a nicer picture before said incident.

Lovely-looking car, great photo!
John -- giving some TLC to a 2006 Winning Blue 231. Mouse Mat Mod & LED sidelights. Fitted the Rotary Revs Coil kit. PZ suspension and Sohn kit fitted. Now have replaced the rusty sump with a new one, and the oil coolers and pipes with tidy used ones.
Top

That reminds me, I must check the wiring on mine, as it goes out in 2nd and 4th gears

Didn't make anywhere near the sort of progress I planned to today, but nevermind...

Jacked the front of the car and placed on axle stands ready to fit front suspension...
Removed the wheels
Fitted the bonnet lifters
Removed the old bonnet stay
Removed the airbox not-MAF pipe and tried to fit RR D585s
...3hrs later, still fitting D585s after removing, airbox, alternator lead, checking 'plugs, googling instructions (cos there aren't any) and trying to imagine what the photos would have looked like if they were still on the RR page, dropping a 10mm nut somewhere (and not finding it)
Then I noticed the passenger front arch liner was cut-off at the bottom, so replaced that with a full arch liner to protect/direct airflow through the n/s cooler
Punched a new hole in the arch flap just below where it had split (as they all do)
Gave the suspension up as a bad job and road-tested the new coils to find an - unrelated - airbag fault

^^ A fairly average day working on an RX-8 then

Those coils were a bloody nightmare. I need to try and find some pics now I'm sat infront of a proper computer and not trying to do it on my phone; I've got one adapter plug hanging infront of the engine hoist eye, one stuck under it, and the other two jammed in under the elephant trunk
Rick - Follow my trackday misadventures at Sonic KaBoom trackday diaries
Top

The front coil needs the adapter in front of the lifting eye.
Nothing should be trapped though, although they're a little tight in there.

Pics and we will help