Recommend me a tow car...

Place for discussions about the RX-8
Post Reply
48 posts

Recommend me a tow car...

Thinking of using my RX8 as solely a trackday car.
What have you guys used or recommend as a tow car / van?
Would ideally like something that gets decent(ish) MPG.

Thinking of using my RX8 as solely a trackday car.
What have you guys used or recommend as a tow car / van?
Would ideally like something that gets decent(ish) MPG.

My LWB. Vivaro is a much better towing vehicle than my discovery is
Wayne

My Bongo means I keep it in the family.

(And it's nice being able to make a cup of tea when you get there...)

My old 335xD was a mental tow car. It didn't even realise it was towing most of the time, and that meant it was also very economical. But I was never fully sure the RX-8 was still going to be on the trailer at the end of the journey

Sent from my SM-G975F using Tapatalk

You need to calculate the gross weight of the track car, trailer and any spares, e.g. wheels that you might also carry.

This will dictate the minimum size of the tow vehicle.

Some modern SUVs and vans have a lower maximum tow rating than you'd expect, for a variety of reasons.

We were at Brands a few years ago and VOSA had a checkpoint just down the road, pulling over all trailers. More than half were clamped for being overweight.

My discovery is a great tow car... because it's does 14mpg towing and makes the RX-8 seem frugal
Top

I have been thinking the same but it’s tough to figure out. On a normal license I think the weight of the car+trailer+track car has to be under 3.5kg?

With the bongo+trailer+Rx8 whats your weight?

3.5ton not kg, but yes, and its the plated max weight not the actual weight of the combo, so if your car weights 1200 the trailer weighs 1200, but the car is plated at max 2.5t gross and the trailer 3.5t gross, you cant tow it on a std catB licence.

but taking licence considerations away and assuming the op has B+E, the mk1 kia sorento, or the current one (the ones in between have pathetic towing capacity) both make excellent tow cars.
Top

Sorry I am still confused

Qwakers is referring to the Maximum Authorised Mass - the highest combined mass that the whole rig is allowed to be, according to the stickers. If it's over 3500 and you are as young as me (or younger) then you are not allowed to drive it without taking a silly test

I have no issue taking the test...yes I need to

But after taking the test I can tow a combined weight of 4.3 tones?

About 12 stone last time I checked.

Yes, I'm old, so I can drive all sorts of things I probably shouldn't be able to. Looking at the little pictures on my licence, I think I can tow a camping trailer behind a minibus, or something....

What you can tow

The rules on what you can tow are different depending on when you passed your driving test.

View your driving licence information to see if you’re allowed to tow.

drive a car or van up to 3,500kg maximum authorised mass (MAM) towing a trailer of up to 750kg MAM
tow a trailer over 750kg MAM as long as the combined MAM of the trailer and towing vehicle is no more than 3,500kg
MAM is the limit on how much the vehicle can weigh when it’s loaded.
You have to pass the car and trailer driving test if you want to tow anything heavier.

If you passed your car test before 1 January 1997 you’re usually allowed to drive a vehicle and trailer combination up to 8,250kg MAM. View your driving licence information to check.

You’re also allowed to drive a minibus with a trailer over 750kg MAM.

i had a b6 audi a4 quattro. they have a really good towing weight for a normal sized car. anything 4wd or rwd and diesel should be ok
id avoid petrol and fwd

Kind of. Our V6 3L Diesel XF is RWD and has lots of oompf, but can't tow much weight even though in theory it should be able to. There's more to these things sadly. My mates small engine 4 pot Astra can tow more.

This thread has riled up my frustration with another reminder of what older drivers are rewarded with, despite the low standard of historic driving tests. Not to mention the lack of a compulsory theory test back then.
Top

Depends on budget really. I picked up a cheap WJ Grand Cherokee which tows the RX8 nicely. Mate of mine has a 2008 Shogun which I would prefer if I had the budget.

OP I notice you're in Surrey - I'd highly recommend this chap when you come to do your trailer test: https://www.mp-dt.co.uk/faq/ 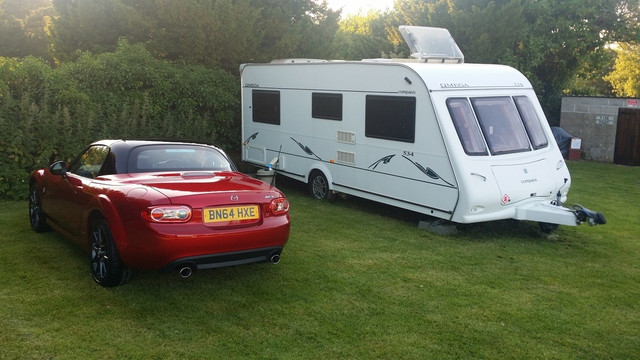 The removable towbar is a nice touch too

These users thanked the author MARKTHOMASBRAND for the post:
GreySilver Beast (Fri Sep 06, 2019 11:14 am)

Was wondering what you were on about, but then read up and those that passed test before 97 have no requirement to do this.
(Not that I've much experience of towing trailers or intent on doing so)
Sunlight Silver 231
Running on a budget to keep the noise level down - from the missus!
Top

I’d go with a Skoda Octavia VRS Diesel - VW build quality and equipment, cheap to buy and run, and still great to drive when the trailer comes off.
Top


This thread has riled up my frustration with another reminder of what older drivers are rewarded with, despite the low standard of historic driving tests. Not to mention the lack of a compulsory theory test back then.

Ahh the misconceptions of youth, let this oldie educate you on the reality of the situation.
We oldies learned to drive on cars, real cars; you know three pedals, a gear stick, and a steering wheel; and if you had paid extra seatbelts and wing mirrors.
NO driver aids whatsoever but brains and skill and a steep learning curve which we all conquered to differing levels of competence, but we all developed some.
I now have a car which came with, and I kid you not….

There is a huge debate that is considering whether this is creating a generation of skill deficient drivers and when I do any instructing of younger drivers I really have to start at the basics because their skills levels are diabolical. The biggest problem I have found is throttle application; younger drivers are so used to DSC that this really is a lost art.

So, I know who I would rather be a passenger with when the going gets difficult.

Ranjan.
p.s., get a Range Rover, best tow car of all time.

And I agree, a Range Rover is the best tow car ever!

NeMFO wrote: ↑
Fri Sep 06, 2019 3:16 pm
I’d go with a Skoda Octavia VRS Diesel - VW build quality and equipment, cheap to buy and run, and still great to drive when the trailer comes off.

With a kerb weight of only 1400kgs, a VRS isn't heavy enough to legally tow a RX-8 on a trailer.

The argument could be made that all the extra electronic hand holding on new cars is required because the fogies who drive them brand new can't concentrate as well or see properly compared to when they passed their test all those years ago .

There are way too many people in the last category, that should never be allowed to drive.

Many were incapable from day one and just fluked their test, while some have become incapable, through age/health related reasons and aren't prepared to admit it.
Dave
The Spin Doctor ™
uǝǝɹɔs ɹnoʎ ʇɹǝʌuı ǝsɐǝld :ɹoɹɹǝ
Top

this Was a good Tow Car