For reviews / technical discussions on the other car.. using the knowledge of others on the forum
Post Reply
64 posts

So I decided to buy a cheap eBay short shifter to give it a go because why not for £13....

The install was actually very easy apart from the stupid bolts Honda use to hold the shifter to the shifter linkage as they don’t have bolt heads. The result was me having to take the whole linkage out and using a pair of pliers and a ratchet to undo the bolts.

So far seems pretty good and has halved the shift distance, not that it’s going to make any difference really on my little d15 engine.

Also ended up removing the headlights and finding a bunch of messed up wiring which I will have to replace tomorrow when I get some new h4 connectors from amazon. Plan is to spray the lights in satin black like I did with my Rx8 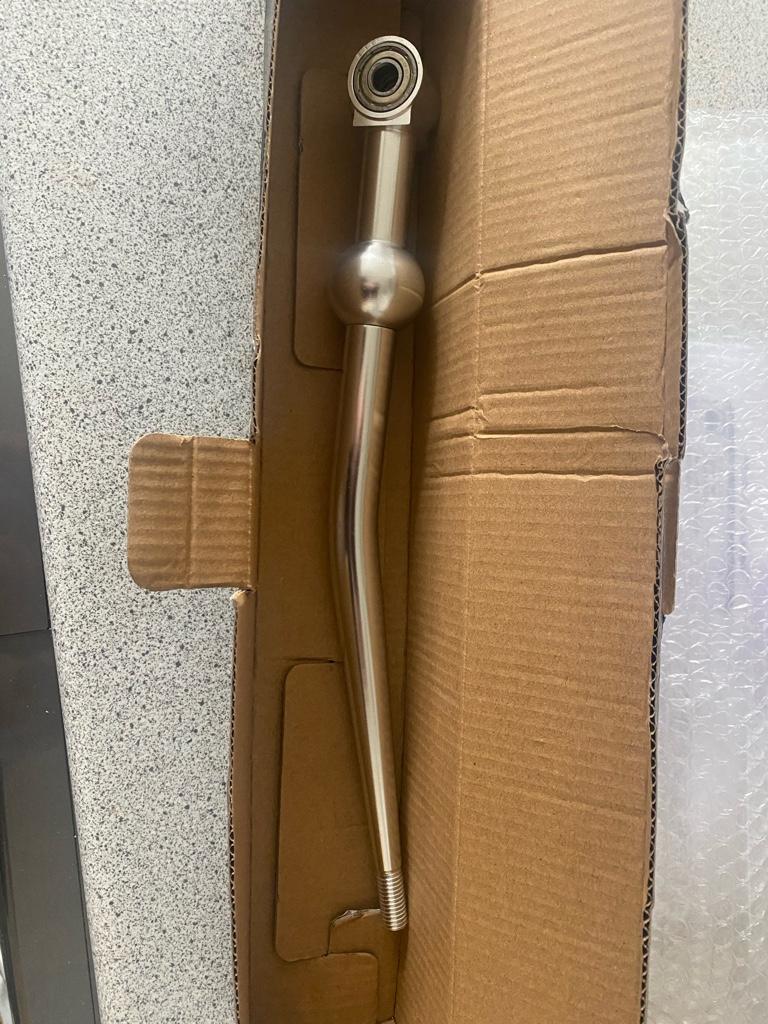 So last weekend I decided I was annoyed with how tinny and loud the Japspeed exhaust I got was and remembered I still had the power flow muffler the previous owner had given me. So I got inspired and decided to buy a little sealey mightymig flux welder.

So this morning I got out my angle grinder and cut up both the backboxes and welded them together. 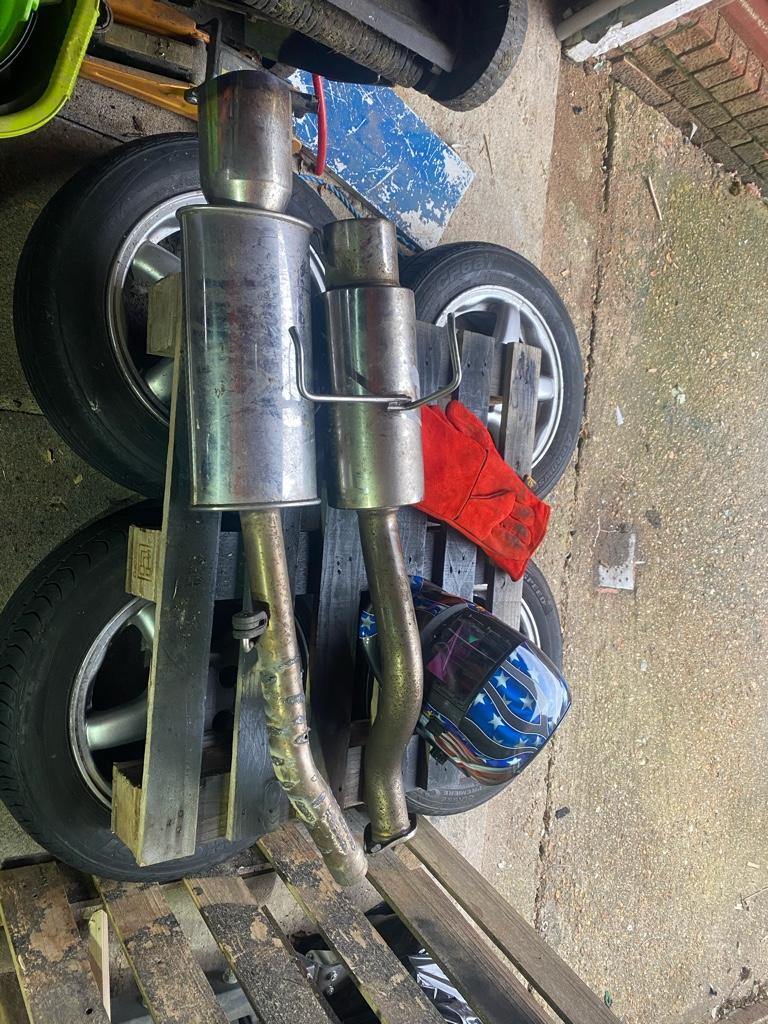 This was actually quite an easy process as the pipes had a big enough difference in diameter to slide over each other and both pipes also had a similar angle coming out of the muffler. 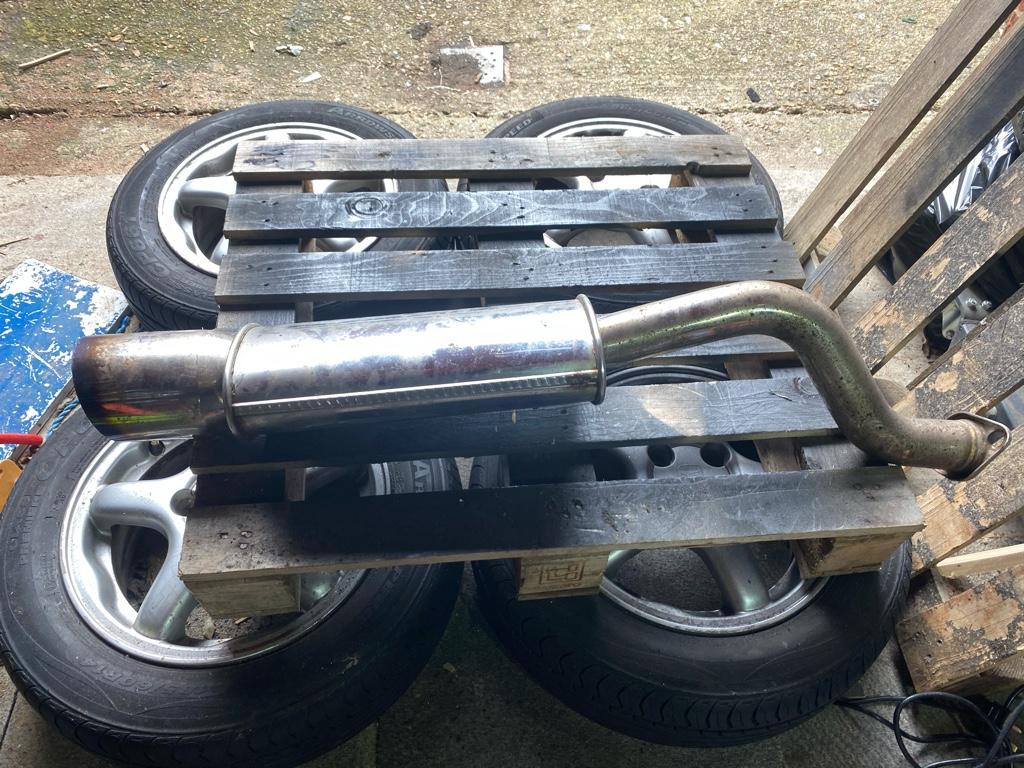 This is what it looked like after I had tacked the pipe in place. I don’t want to show my final welds as they are not pretty at all (and this was my first time welding

) but I am happy enough with the strength and they should hold fine.

The hangers were a bit of a pain as the Japspeed hangers weren’t a straight swap due to the different muffler design, so I ended up grinding them back a bit and then welding them straight to the power flow box. 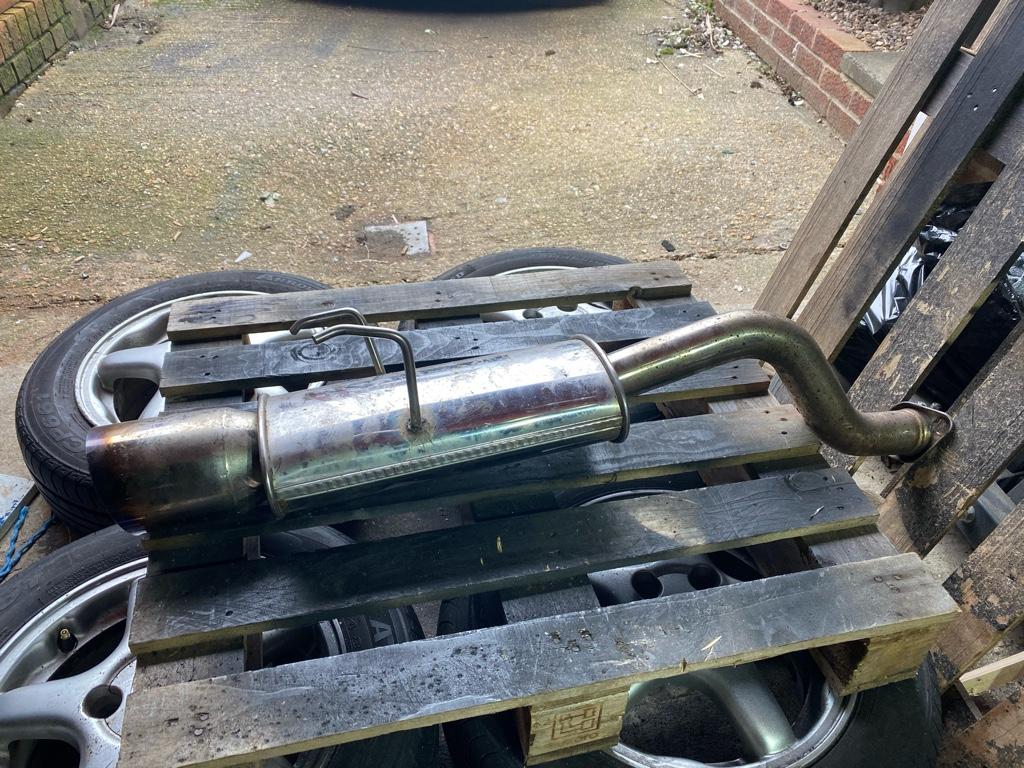 This is the bit that I’m not happy with as I didn’t get the position right and the muffler hangs slightly to the side. I will change this later but my it started to rain so I decided it’s good enough for now. 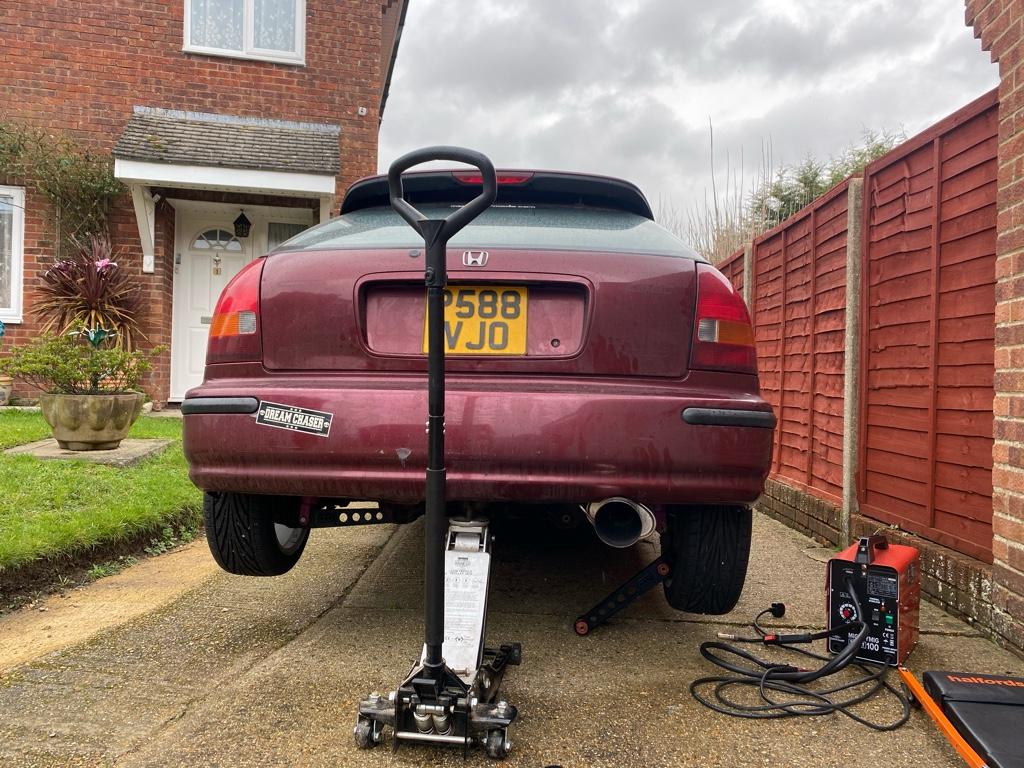 My goal for this whole little project was to make it a bit quieter... but obviously that didn’t happen but at least I’m now sounds a bit better I guess

Last night I also removed the headlights which due to previous bodge jobs were a pain. Ended up breaking one of the h4 connectors and am currently waiting for a new one to turn up today from amazon along with new bulbs.

After taking them out I whacked them in the oven and separated them, undid the 3 little torx screws, scuffed up the light surrounds and sprayed them black. 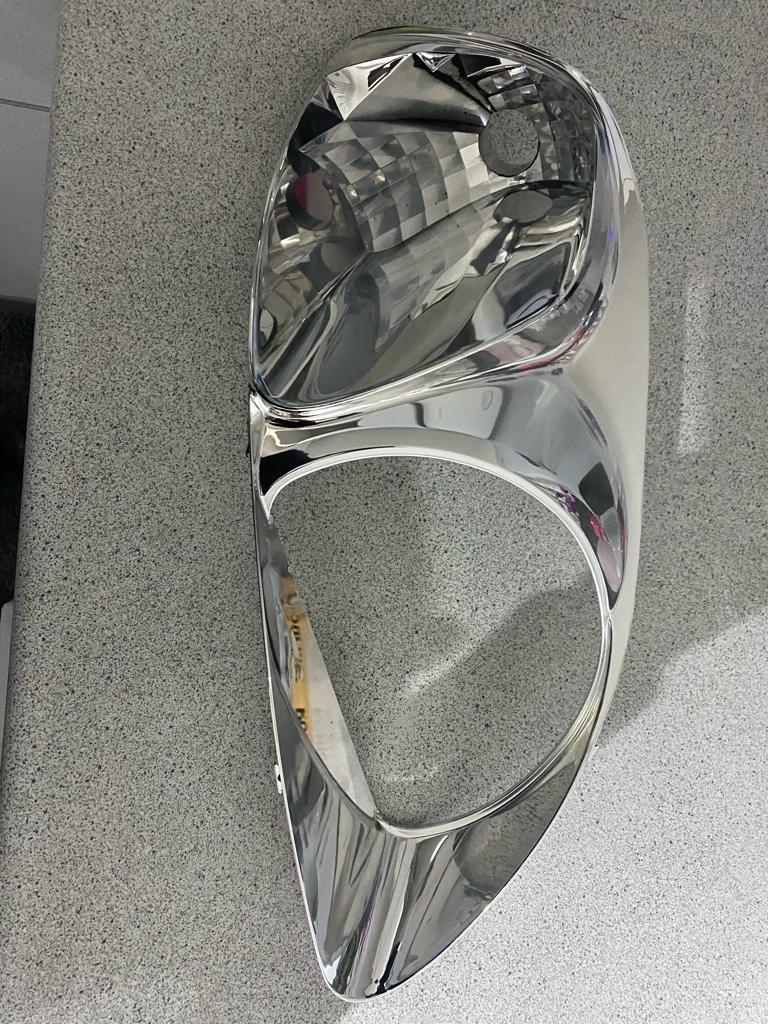 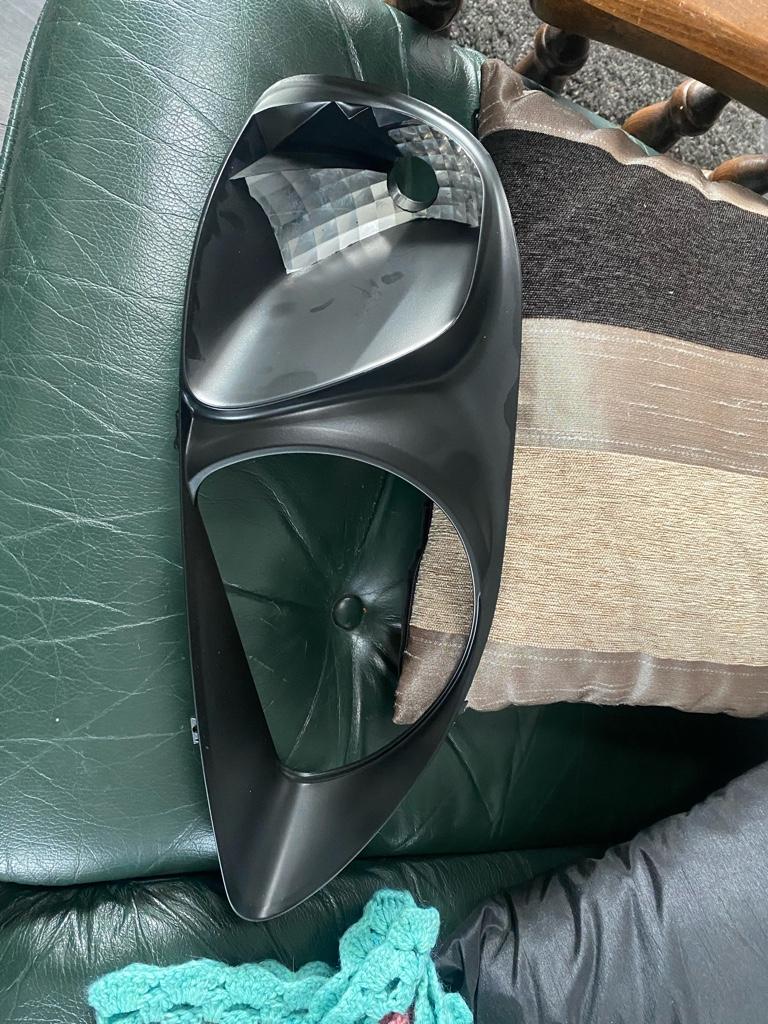 I then sealed the lights up again and put them back in the oven which produced this as the final result. 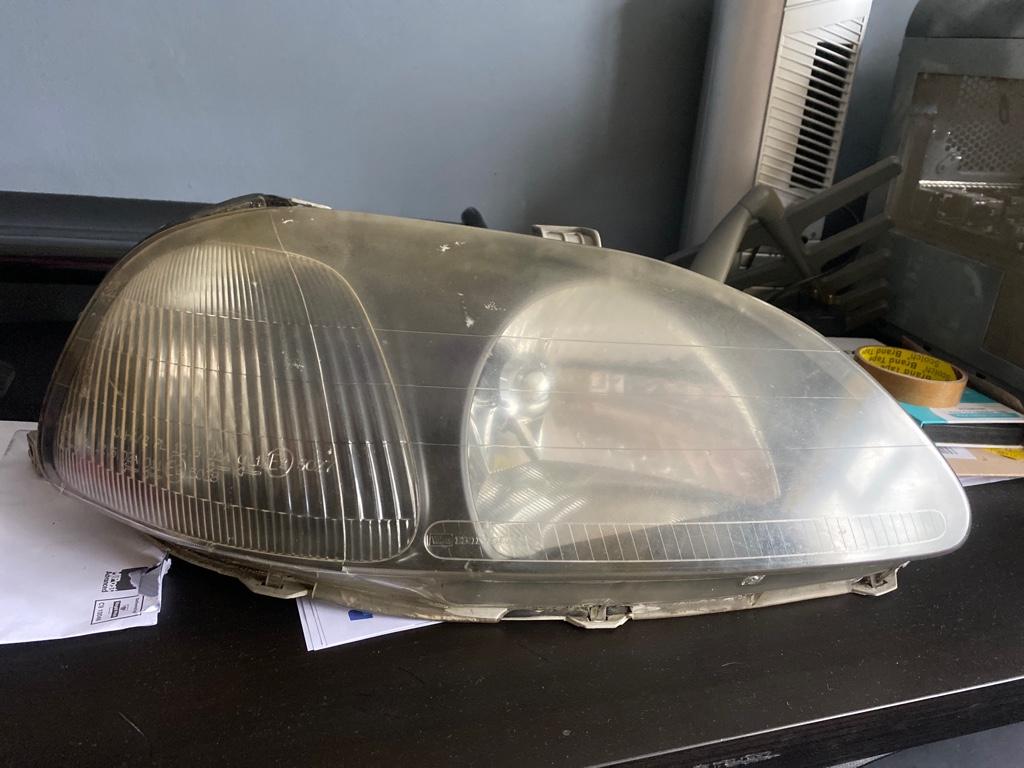 Once they are back in the car I will wet sand them back and polish them to get rid of the haze as well as a little bit of butyl that I got on the lenses as I was rushing a bit.

So I woke up this morning with the intention of cutting and polishing the civic. However I forgot to remind myself how bad the paint was.

So after a quick clay bar and wash I started....

The result was.... well a lot of poorly applied clear coat flaking off of my roof and making a mess.... 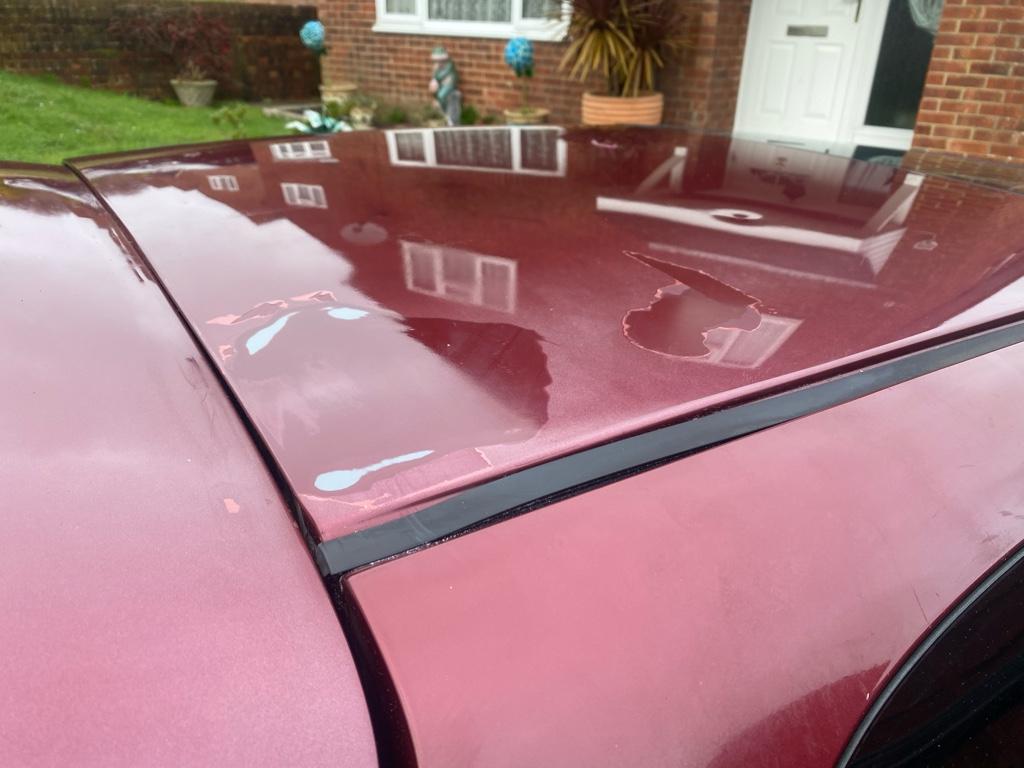 Sent from my iPhone using Tapatalk

MARKTHOMASBRAND wrote:If it's just the roof where the lacquer is peeling you could always have that wrapped in Black or carbon effect

That’s what I was originally thinking but it’s also on the pillars, bonnet and front and rear bumper. The doors are also caked in stone chips so it makes sense to just respray the whole thing. It’s not getting anything specially just a single stage job for now I recon.... just got to figure out the colour, right now I’m leaning towards anthracite grey or maybe even a dark blue/purple.
Top

MARKTHOMASBRAND wrote:Aaaaah that's a shame & all because it's been left in the elements without having any polish/wax to protect it

That was another consideration along with nardo grey but I don’t want to do something that’s so common or build a type r rep which has put me off going with white.

Well that and all the dirt that white cars accumulate ahah, after washing my dads white civic on the weekend the amount of dirt that showed up on it was incredible 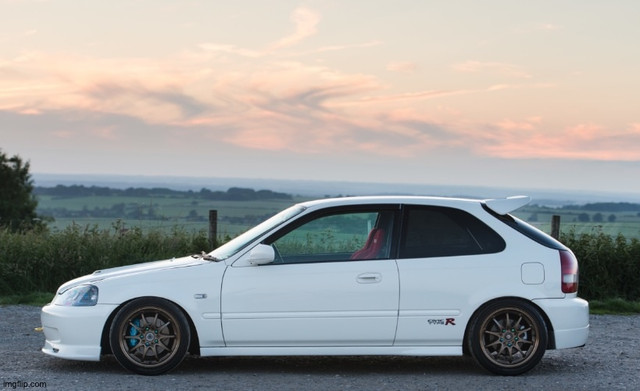 MARKTHOMASBRAND wrote:Those "Work" alloys you have on there ATM could be repainted in Anthracite or Bronze for a nice contrast 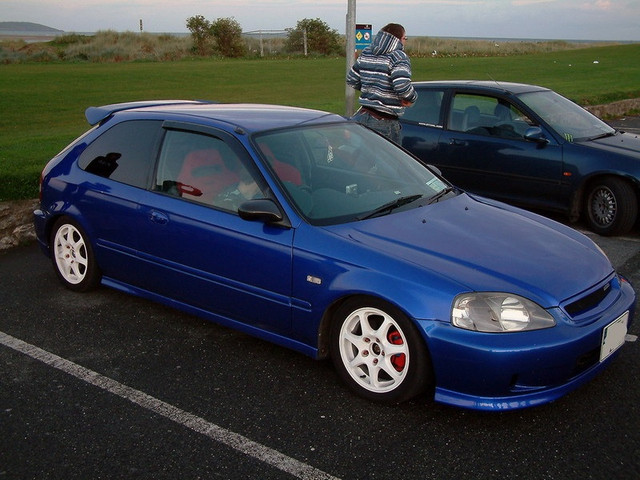 Championship White is a doddle to keep clean

Much easier than dealing with annoying water marks on darker colours

MARKTHOMASBRAND wrote:Of course your idea of a darker colour (Blue/Purple/Grey) with a contrasting white wheel would look awesome too

Championship White is a doddle to keep clean

Much easier than dealing with annoying water marks on darker colours

Yeah I have made up my mind on the wheel colour that I’m going for already which is basically a deep copper/bronze colour as black and anthracite wheels are boring to me. Issue is just figuring out the best colour to go with them as most colours work.

Return to “The Other Car..”