Details of any aftermarket goods for the RX8.
Remember that this may invalidate the warranty. - The club takes no responsibility at all for any aftermarket additions to the car.
Post Reply
14 posts • Page 1 of 1

I've noticed quite high intake temps, up to 150F in traffic which seems silly at below 5C ambient temperature.

I have the K&N intake:

It makes sense that the temps are high since it get most of the air from under the hood at low speed, so I've been contemplating to try and force the air through the hole from the stock box. I know the intake/MAF is quite sensitive and the wrong setup could make things potentialy worse.

I found the below example of custom mods people have done: 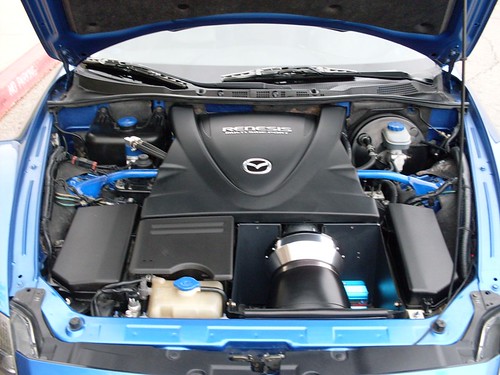 Would a combination of these, aka running a hose directly to the K&N be a bad idea?
Top

The K&N Typhoon is the definition of a bad idea.

K&N Typhoons have a rubbish reputation.. and a definite downgrade to the Mazda setup, which was really well done.. take the darn thing off.. causes real problems as you have now experienced, what on earth possessed you to buy that.. loads of anti info around 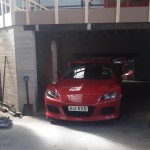 And well done for looking for the data and finding the problem with the intake (well, one of them anyway..)

Got it as a real bargin and with a spare MAF. The reason I bought it is the amazing sound it produces. Stock intake sounds boring compared to it IMO.
Top

Yes but it fecks the cars performance big time, in comparison to stock.. a bargain doesn't mean it's any good

I don't think you'll find anyone on here that recommends it

Got any more info on that?
I did reasearch it before I bought it half a year ago and I did come accross some negative stories but they where mainly pertaining to the version 1 as far as I recall. At the end positive opinions swayed me tho these where on threads on the yank forum I believe.
I know the stock intake is near impossible to improve upon and assumed it will slightly impact efficieny, but you got me a bit worried now saying it does so more than just slightly.
Top

A lot of 8 owners have complained it affects the car with lumpy revs, cutting out and all round poorer air flow.. I was talked out of fitting one by the specialist I take my car to, and for me that's testament enough

He did say, unless you fit an AEM or Racing Beat.. (and that's only for the noise) it won't improve breathing performance over the stock intake!
My Pettit/Milltek exhaust doesn't deserve to be drowned out by intake noise.. it's awesome

Don't know about flow rates ect but intake temps halve with the aem and it's cheap, looks good and available in lots of colours. But I won't sit here saying I gives me X bhp I had It for sound and style

My PZ came with a K&N Typhoon and I was advised by Essex Rotary to get rid of it.
Changing to the stock airbox with a K&N panel filter made a massive difference. We are talking night and day! Smoother idle and better pickup through the rev range
The typhoon does sound epic when the SSV opens tho and I did miss that
Proud Member of the Essex Wankelist Massive
Top

Velocity_Dan93 wrote:Don't know about flow rates ect but intake temps halve with the aem and it's cheap, looks good and available in lots of colours. But I won't sit here saying I gives me X bhp I had It for sound and style

Velocity_Dan93 wrote:Don't know about flow rates ect but intake temps halve with the aem and it's cheap, looks good and available in lots of colours. But I won't sit here saying I gives me X bhp I had It for sound and style

Agreed ! I had to salvage some hose clips off my civic at the time to get it on ! X2 of the joins contain air straighteners, probably much cheaper than building them into the pipes and the others are to get the correct angle. Still a lot though :/
VR bridge port Mazdaspeed with lambo doors yo!
GG bridge port track missile
Phantom stock engine impulse buy