For you to showcase what you've done to your car and give other members ideas and inspiration.
Post Reply
63 posts

So here's the back story....... back in March I discovered that both my rear springs had snapped on my R3. I had always planned, when it was time to replace them, i would upgrade them for Tein monosport.

My R3 is the only car I own and is only really used on weekends or for numerous trackdays throughout the year including annual visits to the nurburgring for trackdays.

Unfortunately On the same day that I discovered the springs were snapped, my car was also in the garage for its annual compression test to check its health of which every year since completing trackdays had increased it's compression with the last test being last year August.

However although the car not showing any signs, this test showed possible side seal failure

With less than a month before my trip to the nurburgring trackday that had all been paid for including the villa I had to make a decision on that day to get a rebuild done to allow enough time to run it in before my trip.

As I now had to pay for a prompt unplanned rebuild I decided to opt for a set of Tein Flex Z coilovers instead of the monosport due to my outlay on the day. Once my car was picked up I began to run the engine in with a short trip up to york to visit some friends for the week.

During the drive I immediate wasn't happy with the rear coilovers which seemed to make a crashing bang when hitting imperfections in the road and sounded as though my suspension was falling to pieces. I spent the week adjusting the dampers to try and fine tune them. Although it helped a little, the crashing sound was still present over bumps and upon inspecting the rear coilovers, they looked terrible for a week old set and there were signs that they were coil binding.

The suspension was set up correctly and measurements were as recommended as per their instructions. I'm at the opinion that the rear springs were to soft (rated 5) for my R3. With working with the retailer and Tein, it has now been agreed in a full refund.

I am planning to get the Tein Monosport so I can eventually also get the edfc system also fitted at a later time. The springs are rated 10 front and 7 rear.

It has also been suggested that I consider MeisterR which are rated 8 front and 5 rear, although the edfc will be out the picture.

I’m probably not going to help here as I don’t have experience of either.

As a result I’ve ordered a set of KW V3s since I do have experience of theses, plus they are fully adjustable for height, compression and rebound.

KW doesn’t publish spring rates so fingers crossed. I had a discussion with ‘Slip Angle’ of YouTube game who cited the same issues as you with rear Teins - that counted me out immediately.
Current: '07 Kuro, M5 Competition
Gone: '06 VR 231, M3 Competition Package
Top

Ahh-haah, another example of the Flex Z units being awful - but Clive etc will still say they're great and everyone just sets them up wrong and they've never had any complaints

Meisters are very good and if you can stretch to it a set of ohlins would be the mutts nuts...
R3 GONE, FUN WHILE I HAD HER BUT NOW LOVING MY 25TH ANNIVERSARY MX5

I have Tein Monosports on my track car and in my opinion they are excellent.
They are stiff for road use but not overly stiff in that with the dampers backed off the ride is compliant. Bear in mind that my car is stripped out so probably 150 to 175kg lighter than a normal RX8 which probably makes them seem slightly stiffer.
On track they are excellent with great control and balance.
Really good value for money and quality/finish seems very high.
Ohlins by reputation seem superb but you do pay a premium at twice the cost that I don’t if you really get an appreciable benefit for.
I have no personal experience of Meister R. Chris Holmes had them on his previous RX8 and I know he rated them highly.

I’m actually running Chris’ old Meisters, I have no experience in track with these coilovers, but on the road they’re okay... just okay... they’re a bit stiff but there’s a lot less body roll.

Many thanks for the feedback so far

Well, I made the decision to go for the Tein monosport and these were fitted today.

More fine tuning of the dampers will be done in due cause but overall I'm very impressed with them and the service provided.

I can't be sure with the Monos but I believe some of them recommend a 'running in period' with the dampers set full Soft I believe - could be wrong, but maybe worth checking in the destructions.

Glad you are pleased with them so far Marc.

On the road I run mine 8 clicks out (half way) and on the track 4 clicks out.
Mind you the last track day I did I forgot to adjust them so stayed on 8. Seemed perfectly fine.

I found anything less (harder) than 8 on the road makes it a bit skittish but again that could have something to do with my car being lighter.

I don’t remember seeing anything in the instructions about a running in period for the Tein’s.
“Extraordinary claims require extraordinary evidence " Carl Sagan.
Top

What are you doing with the ARBs?

I've just checked. The only thing they recommend is to dial the dampers from full hard to the recommended values which is 8 clicks back from hard which is halfway like graham has recommended.

Mpv2k3 wrote:I've just checked. The only thing they recommend is to dial the dampers from full hard to the recommended values which is 8 clicks back from hard which is halfway like graham has recommended.

I’m looking forward to setting up my car -when it’s back - with KWs. I have the droplinks on but no ARB changes yet. Intrigued to see how it performs.
Current: '07 Kuro, M5 Competition
Gone: '06 VR 231, M3 Competition Package
Top

What is the weight saving for Tein Monosport vs the stock R3 setup?
RX8 R3 Aurora Blue Mica

I can’t imagine there is any.
Although I did not weigh them when fitting to my S1, I think if anything they seemed marginally heavier.

Agreed. Tein have very strong / thick steel uppers mounts and brackets. I'd also say they were a little heavier.

MeisterR must be a lot lighter than Tein I’m assuming?

Well Demon Tweaks let me down so badly with the KWs - when I chased them on the revised delivery date they told me another 6-7 weeks.

So order for the KWs cancelled and I hastily got a set of Tein Monosports with EDFC Active kit which I’ve fitted this weekend.

They seem decent and adjustability with the EDFC is a breeze. Hoping to MOT the car tomorrow so I can take it on a long drive up north. 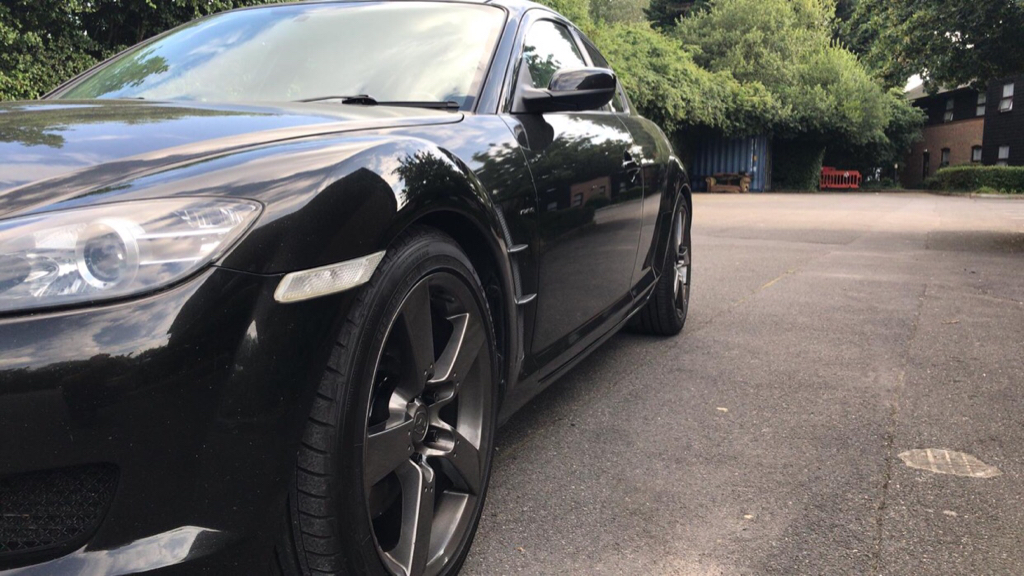 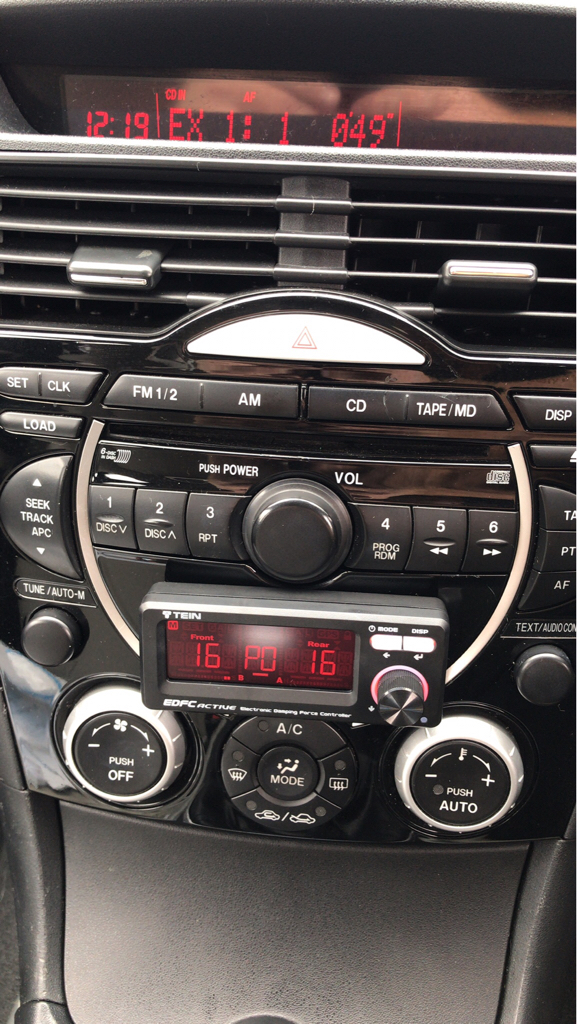 I do love this option for the Tein.
But I will save up for meisterR is a bit cheaper.
BatRex 192 stock
Top

MOT passed with no advisories. Having the wheel alignment done now then hitting the road.

I’ve got Tein Mono’s on mine and was thinking about the edfc kit, so be interested to see how you get on with it.
If venturing up t’north don’t forget you’ll need your passport and translation manual once past Birmingham 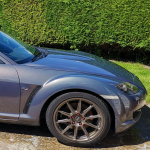 I have the flex Z on my car, I got them after a couple of recommendations and going out in a car with them fitted. They are lovely for road use, progressive, communicative and smooth, but they would be far too soft for track use.
Galaxy Grey PZ number 24.
Large street port. Lots of flames, lots of smiles.
Top
Post Reply
63 posts